Below the cut is that long-promised photoessay on the Union Cemetary Gatehouse here in Bellefonte, concentrating on a strange late-Victorian-era architectural detail, the impaled gable. Images courtesy of Jason Gullickson of mylens. Click the "+" for more.

This is a building standing on the northwest corner of the Union Cemetary property in central Bellefonte, arching over the entrance to the cemetary from Howard Street. Union Cemetary is an old hilltop-style cemetary behind the county courthouse complex on High Street, between Howard and High Streets. 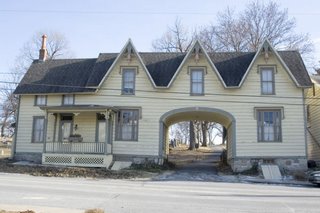 Union Cemetary inspired this poem not long after I first moved into Bellefonte. It's a grand old cemetary, which holds the graves of three Pennsylvania governors, including Civil War-era Governor Andrew Curtin, his brother the general, and an interesting scatter of nearly-anonymous USCT graves at the foot of the hill among the "colored" section which testified to Bellefonte's prewar service as one of the stops on a spur of the Underground Railroad.
As you can see, the Gatehouse is clearly a neo-Gothic building, albeit a rather modest and unassuming specimen of the species. It has three sharply-defined gables in the front, and four gables in the back: 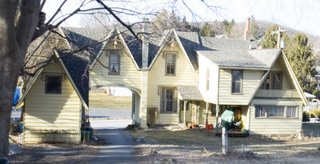 The Gatehouse looks like a stylistic whole from the streetfront, but as you can see from the rear view, it has had at least one extension built in the century or so since its initial construction, and possibly two if that unbalanced dormer on the right-centre of the building is what it looks like - an extension built on an earlier, more-harmonically balanced extension from the rear of the original right-rear of the building. You can't quite see it here, but that lower "gable" on the left hand side is actually a detached shed located across a patio & artificial spring from the proper left-rear of the Gatehouse itself.

As you can see from both the front and rear images, the house actually arches across a functioning entrance to the cemetary, a paved road wide enough & substantial enough to take your Expedition-class SUV without strain - I ought to know, I've dodged such beasts more than once, walking under that arch. Another obvious later addition is the ungainly concrete-brick chimney to the right of the gateway arch. Looks like heck, especially compared with the period clay chimney-pot at the far right, but the probable inherent ineffeciency of that very clay chimney-pot is most likely what inspired that concrete chimney addition. 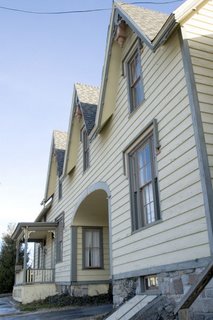 This view here demonstrates some of the more exccentric elements of the Gatehouse, and of this class of Victorian construction in Bellefonte in general. First is the peculiar steep roof detail in between the gables. Note how the slope of the roof in between the "v" makes a sharp diagonal overhang with the face of the building itself.

But the second, more interesting, element, are the beasties resting in the peaks of each of the three front gables. There are wooden posts jutting downward from each gable-peak, looking for all the world like a set of stair-bannisters nailed upside down into the cleft formed by each gable's sides. It would be peculiar enough if this were an architectural detail unique to the Gatehouse - the crotchet of some crazed do-it-yourself-er Victorian, but it seems as if these "spar pointed down" gable-impalements were some kind of craze among the lesser lights of Victorian Bellefonte at its influential height. I haven't found any of these impaled gables among the buildings put up by those who actually ran the town in those heady days, but minor buildings, built no doubt by the lesser landed folk and the middle-middle class, can be found in certain parts of t 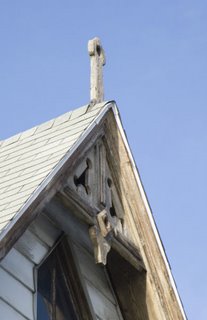 own with said spar-impaled gables.

There is the Gatehouse, of course, but you can also find these impaled gables in the surviving neo-Gothic houses along High Street south of Union Cemetary as well. Here is what must be the most outrageous example of an impaled gable, in which the spar has actually been run through the roofline of the gable, and protrudes from the gable like a giant's sewing-needle. You'll also note the wooden detail-work visible around the central spar, which would have left the impression of a less intrusive, harmonious whole in the gable-assemblange - if the architect had not then allowed the central spar to jut skyward like a wooden lighting-rod! The peculiarity becomes more acute when you realize that there seems to be no lighting rod at all in this agglomeration - that seems to be all wood in there. Surprisingly enough, this building has not yet been struck with lightning, or at least, not enough to cause its destruction in the century or so since its construction.