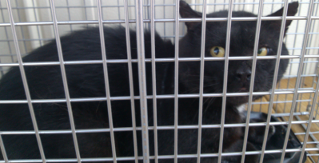 We may have to go to the animal rescue people at this point.  We've also ran out of adoption slots for the kittens, everyone who can take one right now is full up.
Posted by Mitch H. on 7/26/2013 3 comments:

So my cat, Otonashi's mother is still in the wild, and still having litters.  We've started trying to capture the current litter, and Brian H, a co-worker, bought a live trap.  He caught one of the 4-to-5 kittens last night with his brother, although I'm told they had to turn the trap upside down and shake it out, because it was clinging to the wire mesh like Spiderman.  They re-set the trap, and in the morning, there was a second kitten.

Brian went to transfer the second kitten into a carrier, when he noticed the mother hovering in the bushes, hissing violently.  Then she started charging at him.  He shied a pine-cone at the enraged mother, but it didn't stop her, and she chased him into the building, the second kitten escaping in the chaos.  Reportedly the mother was pacing outside the office door for a bit.  Mind you, we're not talking about a big cat here, your average black housecat, a little on the small side.  But she apparently was doing the full-fang ready-to-kill charge.

Anyways, here's the captured kitten, who probably will go to another co-worker who just had her elderly cat die...  as you can see, it's pitch-black, and spot-welded to the back corner of the carrier.

Full Disclosure: within the past several months, I been hired by several hedge funds to advise them privately on the legal issues surrounding these events.

"I been hired by"? How can you expect to be taken seriously when you can't be bothered to have someone check your op-ed pieces for basic grammar?   Especially when you're shilling for a klatch of corporatist profiteers who managed to get caught without a chair when the music stopped.  The moral hazard of making fat income off of pseudo-governmental entities like Fannie Mae and Freddie Mac is that there's always the chance that those implied guarantees are actually poison-pills when the deluge comes and the government guarantors do their goddamn jobs for once and protect the taxpayer instead of crony big money.  Or, for that matter, they do the usual thing and favor some crony class *other* than your speculating ass.  Look up "risk", and always remember - politics is a risk.  You should *avoid* political influence unless you're the one swinging influence your own way, in which case - shame on you, you corrupt tool.
Posted by Mitch H. on 7/17/2013 1 comment:

The Professor is talking up that Rowling pseudonymously written book, of which I don't quite understand the purpose.  The adoption of new nom de plumes is, I understand, now common practice for mid-list authors who have found themselves frozen out by underwhelming sale numbers.  Or,  I should say, it *was* common practice back in the immediate aftermath of the collapse of the midlist. (I really should read through the whole of that Rusch writing-business series when I have a moment.)

Anyways, it makes sense to take a pen name when you're struggling or have been given the editorial kiss of death, but why would a massively successful best-selling author cut her own knees out from under herself like that?  Ego, I guess?
Posted by Mitch H. on 7/15/2013 1 comment:

And really, building new snob-appeal menus based on per-Conquistidore Aztec diets?   How many times do I have to remind y'all that ritual and (possibly) dietary cannibalism was a common element of most Nahuatl cultures of the time, but *especially* the Mexica or Aztec?

There's a Mexican restaurant in the county named "Rey Azteca".  I refuse to go every time someone brings it up... I don't want to set foot in an eatery that might as well be named "King Cannibal".
Posted by Mitch H. on 7/14/2013 4 comments:
To continue this antechamber exercise, the Professor, who watches TV so I don't have to, saith they've found Zimmerman not guilty and lo! Fox News so reports.  If I'm lucky, I spend my weekends gaming with various friends, and if I'm not, drinking and watching Japanese cartoons. I've been doing both this weekend, as events and friends' travel plans dictate.  Neither has much scope for the close following of news on the weekend.

Anyways, the Professor sniffs that the much-feared race riots have failed to materialize. From that Fox report I see that this is not absolutely true - there's some minor vandalism in Oakland, and much gathering of crowds, well-culled by police departments experienced at dealing with Occupy vermin outbreaks.  But she's right in that the feral outbeaks anticipated by commenters like Icepick have failed to materialize so far. Although in fairness to Icepick, I see I was conflating his mild worries with some more... overwrought comments from folk I didn't recognize in retrospect.

The Professor notes a car-nivorous squirrel story.  Maybe there's just something about Sequoias that attract wild animals.   Is there something sweet or tasty in Toyota's paint composition?
Posted by Mitch H. on 7/12/2013 2 comments:
Oh, you sci-fi boys, you think you are about technology and manly dreams of complicated machinery. But you want love. Dreamy, creamy love.

But, Professor, all advances and development of note are merely the carefully laundered sublimation of frustrated ardor, are they not?  Mock not the careful trappings of ferociously sublimated geekery, lest our entire swaying tower of technological prowess tumble and fall!
Posted by Mitch H. on 7/12/2013 No comments:
By the waters of Babylon,
there we sat down and wept,
when we remembered Zion.
On the willows there
we hung up our lyres.
For there our captors
required of us songs,
and our tormentors, mirth, saying,
“Sing us one of the songs of Zion!”
How shall we sing the Lord’s song
in a foreign land?
If I forget you, O Jerusalem,
let my right hand forget its skill!
Let my tongue stick to the roof of my mouth,
if I do not remember you,
if I do not set Jerusalem
above my highest joy!

Posted by Mitch H. on 7/12/2013 No comments:
So there's an angel with a burning sword standing before my door into Althouse's comments section.  She wants to out-source to our own little bloglet comments sections, and since I have let my blogspot account fall into decrepitude, I thought "why not?"

Last night, she asked the difference between a traveller and a tourist - and my first thought was that "traveller" is a synonym for "gypsy", and no-one wants a caravan full of those parked on their street.  But I suppose in the context asked, "traveller" is for that arrogant sort that hates to think of himself as an ugly American, a fat tourist wandering around landmarks in oversize sunglasses and baggy shorts.  (Some rogue spell-checker objects to the extra ell in "traveller", but nuts to that, two ells has more of a song to it.)

The other quote is from one of my favorite books, "Walden," by Henry David Thoreau: "I have travelled a good deal in Concord..." Concord! Not even Massachusetts. Concord. Of course, he didn't have a car.

Walden again... damn, I'm a lot like Thoreau, at least in temperament, habits and prejudices, but every time I slam up against his Walden rubbish, I find myself hating those parts of me that I see in him.  Insular, pompous, incurious, misanthropic, narrow, indolent... I can't help but think that he might have been worth a pinch of owlshit if he had been kidnapped by gypsies as a child and had his outlook forcibly expanded by encounters outside of his own small sphere.

ADDED: A reader quotes my "Those who get paid for a particular type of work may find it hard to explain the value of the activity to someone who isn't getting paid but must in fact pay"

One quote deserves another, from Bujold's A Civil Campaign, which I once had taped up in my  cubicle back when I was the company bookkeeper:

Never... ever suggest they don't have to pay you. What they pay for, they'll value. What they get for free, they'll take for granted, and then demand as a right. Hold them up for all the market will bear.
Posted by Mitch H. on 7/12/2013 14 comments:
Newer Posts Older Posts Home
Subscribe to: Posts (Atom)