I had a nightmare this morning about Credit Anstalt and British naval mutinies this morning. I really oughtn't read Depression business histories prior to going to sleep. I'm not sure if I should call it a nightmare, or pre-waking musing on the news of the day before. More and more, the Euro is looking like this generation's gold standard. More and more credit is going to get tossed into its maw to maintain the unsustainable status quo until a series of sovereign defaults causes everyone to bail out in hopes of not being the one left holding the bag. Beggar they neighbor, here we come.

Meanwhile, I've been watching a show I don't particularly like, 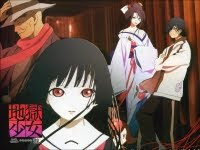 Hell Girl. It's a supernatural contemporary fantasy, basically a series of half-hour revenge plays. Our villain protagonist and her coterie of lesser demons offer revenge on the target's object of grievance, promising to drag said object directly to hell in exchange for the eventual damnation of the target's soul. The episodes are usually crafted in such a way as to make the audience root for the double-damnation, and in fact, as of episode 15, not a single target has gotten away scot-free. Initially, the setups were pretty rote, and I was grumbling about how formula it is, but after a while the writers started changing things up & introducing a second protagonist with whom you could actually have a moral affinity, this sketchy freelance journalist whose psychically-entangled daughter keeps seeing visions of the process of vengeance-solicitation & damnation as it happens.

The issue is that the nominal villain-protagonist has very little depth or back-story. She shows up, she puts the spiritual loaded gun into the hands of the aggrieved, and hovers about, not doing much of anything other than collecting evidence & waiting for Chekov's curse-doll to go off, whereupon she forcibly ushers the grudge-object into Buddhist hell. 80-90% of her dialog is exactly the same, from episode to episode. Her three demonic renfields have more character, and more lines, than she does.

Also, she doesn't seem at all picky about the vengeance she wages. Initially, they show you the demonic band demanding the villainous victim offer remorse, and his or her defiant refusal. Then the cases get shakier and shakier and the revenge-takers squirrelier and squirrelier, and we start not seeing this scene of self-incrimination before the demonic tribunal. And the grudges start getting really, really mistaken, although not invariably so. The writers are building up a case that no act of revenge is worthy, but then they keep undercutting that case whenever it starts getting overwhelming.

Anyways, it's an interesting show for arguing with the screen. And the first season was dirt cheap.
Posted by Mitch H. on 11/18/2010