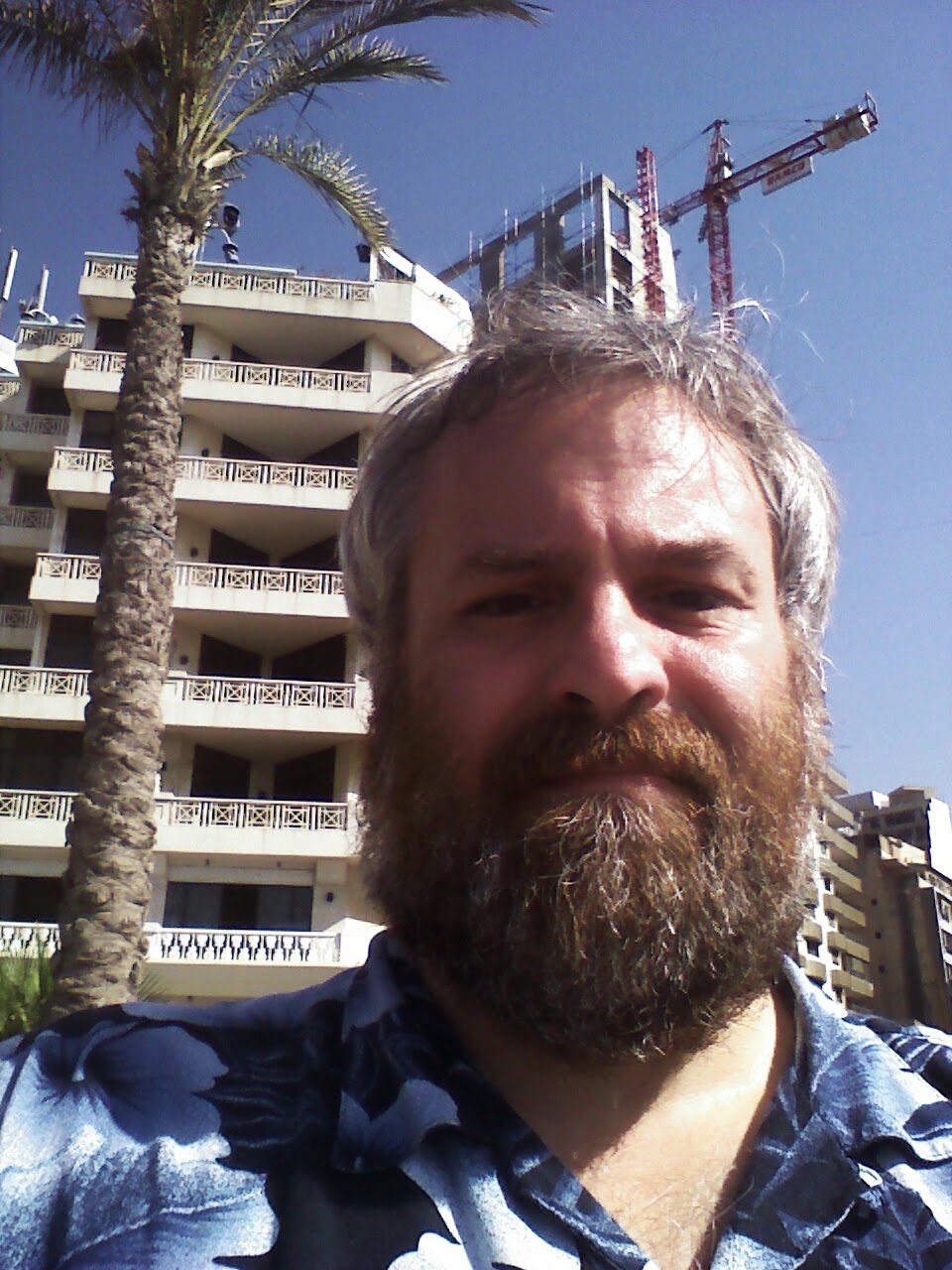 So, Beirut.  I stayed at the Bayview Hotel on Zaitunay or Saint George Bay on the north coast of the city.  Jeremy recommended the hotel as being relatively safe and reasonable, and I found it to be so.  The senior staff had enough English to help me navigate in a city where the primary language appeared to be Arabic.  This doesn't seem to be a city where people are eager to come up to you and attempt to practice their English.  As you can see in the background of this picture, there's a lot of construction going on in Beirut, there was a massive high-rise under renovation or construction above the bay to the east of the Bayview, tall enough to put the hotel in its shadow.  Building cranes rise in clusters throughout the city, and as I was to find, the single biggest import of Lebanon may well be construction cranes - they were springing up all over the coast, in clusters of two and three, over high-rises, apartment blocks, office buildings, beach resorts under construction, and in at least one case I saw, as jury-rigged loading rigs for a construction-supplies depot housing, yes, more disassembled construction cranes for transportation elsewhere in the country.  The construction crane could very well replace the cedar as Lebanon's national tree. 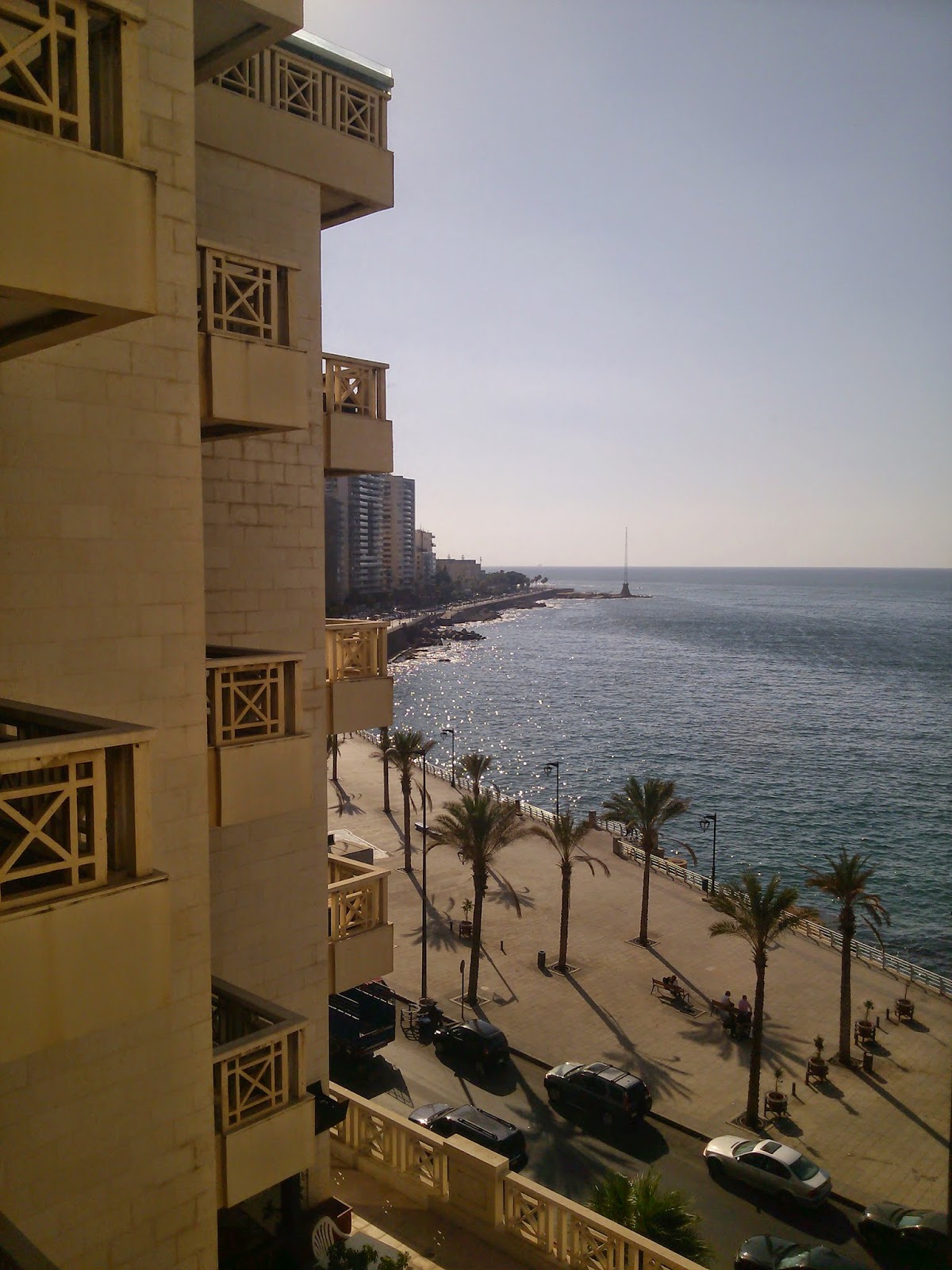 This is the view westwards along the Corniche from my hotel room.  The Corniche is a promenade along the side of the bay, between the ocean and the coastal highway, which is a very busy divided highway, and must be a holy terror to drive during the day.  Lebanese drivers are infamous even by third-world standards, but I found their reputation somewhat overblown.  They didn't strike me as all that much worse than, say, Roman drivers, although late in the week I did come across a SUV which someone had driven full-tilt into a two-foot-tall block of concrete, crumpling in its fender and launching it high enough to leave its front hanging in the air, propped up as if a giant had just left it leaning there like a dog leaning on a divan, looking for a treat.  Anyways, Lebanese drivers tend to signal by carhorn, which is something to watch out for, and probably one ought to give everyone a bit more space than you normally would if you were in a more... Teutonic country.  They drive by Mediterranean rules here. Walking around Beirut, I don't think I ever got to Hamra proper, and I wasn't familiar enough with the neighborhoods to identify where I *did* go, once I got out of the hotel district.  I think I was mostly in the the higher-end district to the east and north of Hamra.  As you can see, there are plenty of high-end shops, and lots of expensive European cars.  Cars are a big deal in Beirut, they're all over the place, and finding places to park them is a serious business.  Every parking lot has at least two attendants, and one of them usually was in something approximating military fatigues, presumably. 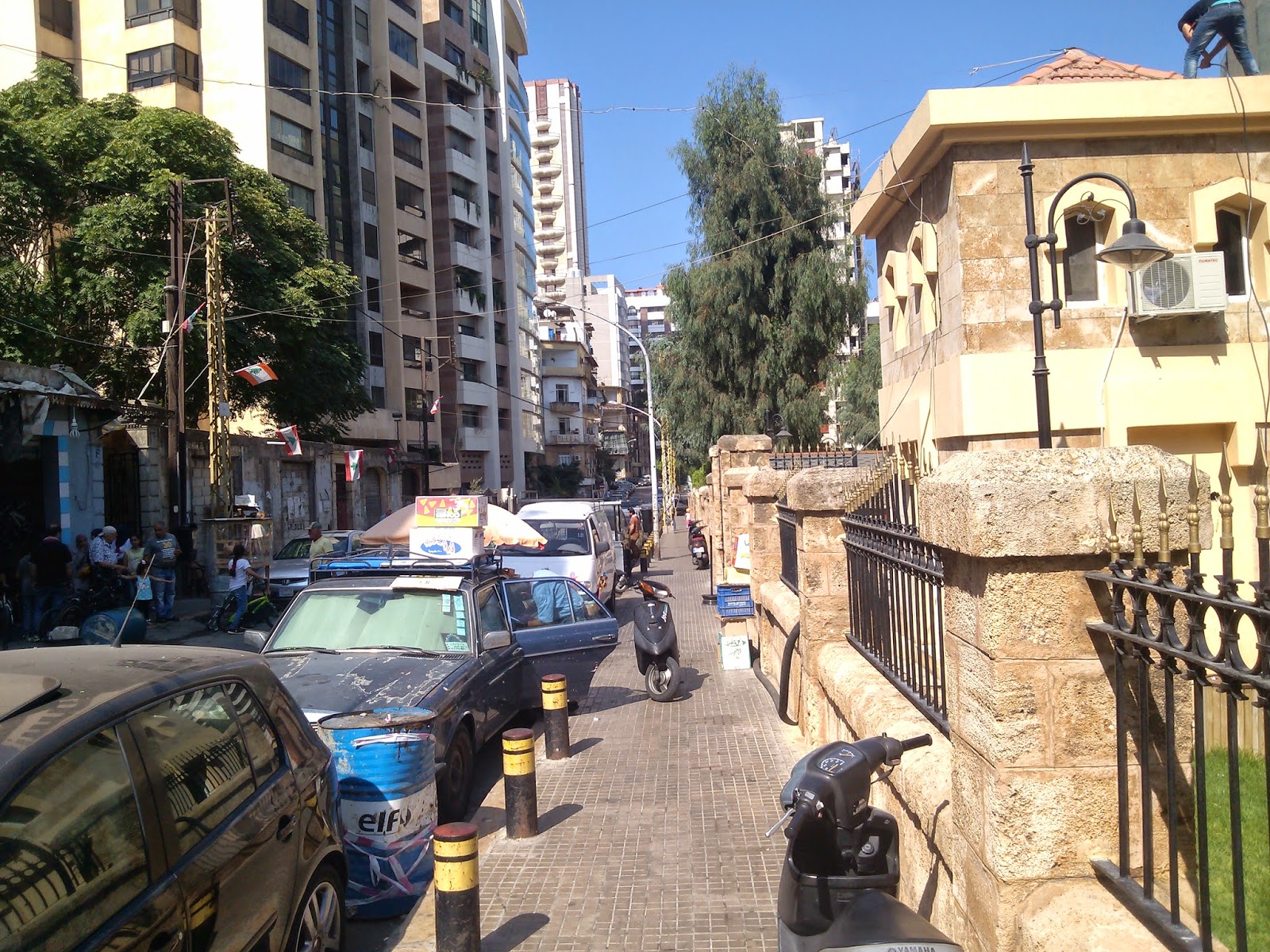 Which brings up the subject of the military.  They were all over Beirut when I was there, manning checkpoints, guarding buildings here and there - including a Maronite Church, a cluster of banks, some government buildings (I think) and, for some reason, an entire squad camped out along a street next to this children's park, on the other side from where I took the photo.  Presumably there were government buildings or party headquarters or something over on the other side, because I can't imagine why they'd be out in such force for a park.  A remarkably nice park, mind you, but still a park.  Beirut is very much an Arabic city in that greenery is a private good, locked away behind compound walls.  Some of the only shade from the August sun was to be found from the dense bushy foliage pouring over this wall or that. The section of Beirut I walked was, I think, Sunni, but honestly I don't know enough about the differences to be able to tell a Shia mosque from a Sunni one.  There were a number of small mosques here and there, but there was a fairly large one across the street from the Bayview which broadcast the muezzin call to prayer via loudspeaker.  Not oppressively loud, but I had been told that this did not happen in Beirut, which obviously was misinformation.  As I said, there's a lot of construction going on, but few parts of this part of Beirut are run-down and slummish.  It's a city sloshing about with a lot of construction money, even now. 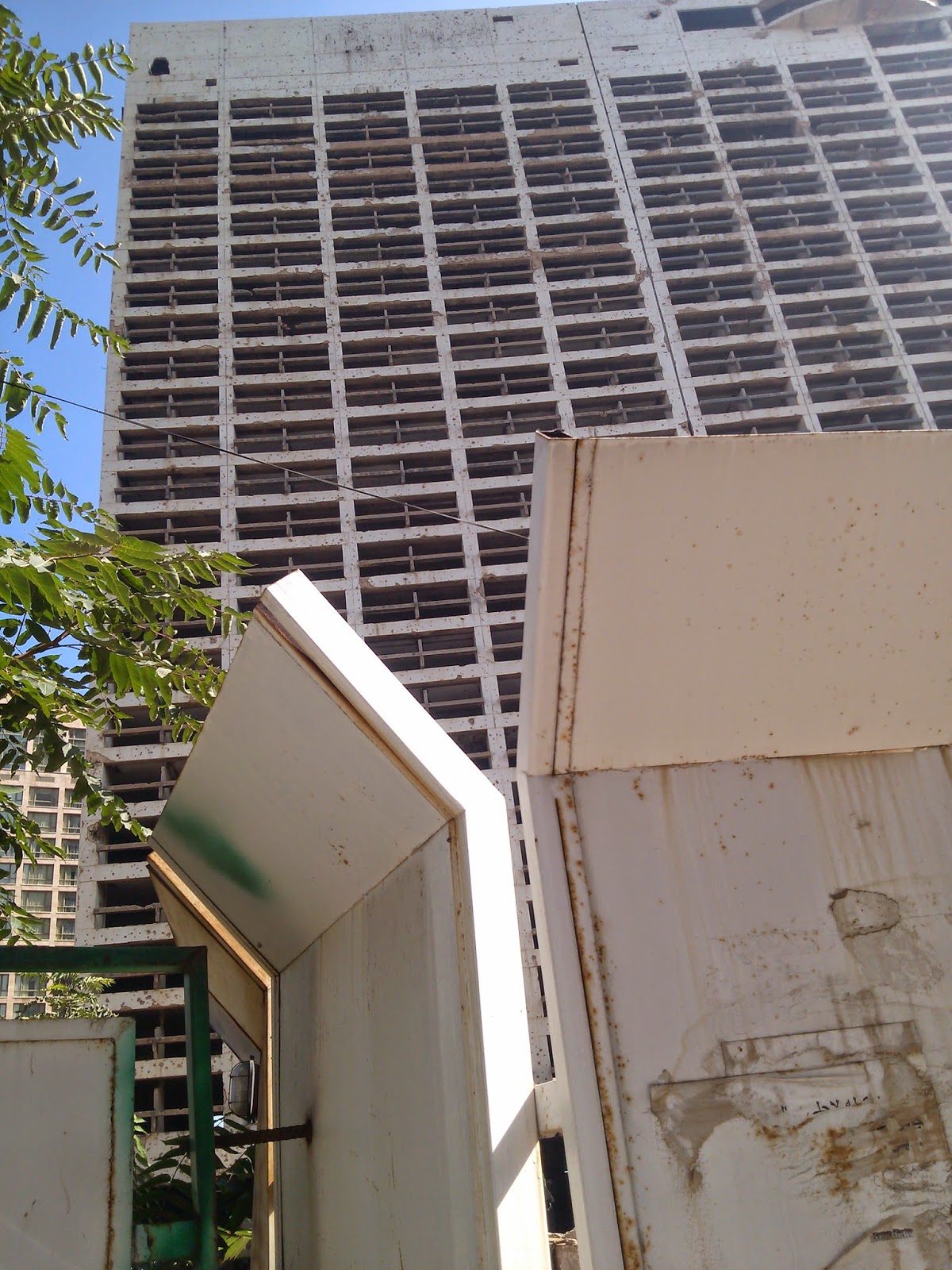 The exception being this relic of the Civil War, the ruins of the old Holiday Inn Beirut, epicenter of the Battle of the Hotels.  It was heavily shot-up, rocketed and shelled during major fighting in the mid-Seventies, and seems to have been one of the few parts of the city which hasn't been torn down and replaced or renovated.  But then, there's so many other active construction sites - I walked past at least a half-dozen in a single morning - that this one could just be the result of ambigious property ownership, lack of interest, or the fact that it's way the heck back from the rest of the hotel district and the active areas of the commercial districts around it.  The city just has developed away from the old Holiday Inn.  But like I said, you have to strain to find signs of the old Civil War wreckage and divisions in Beirut, and this is the exception to that rule.