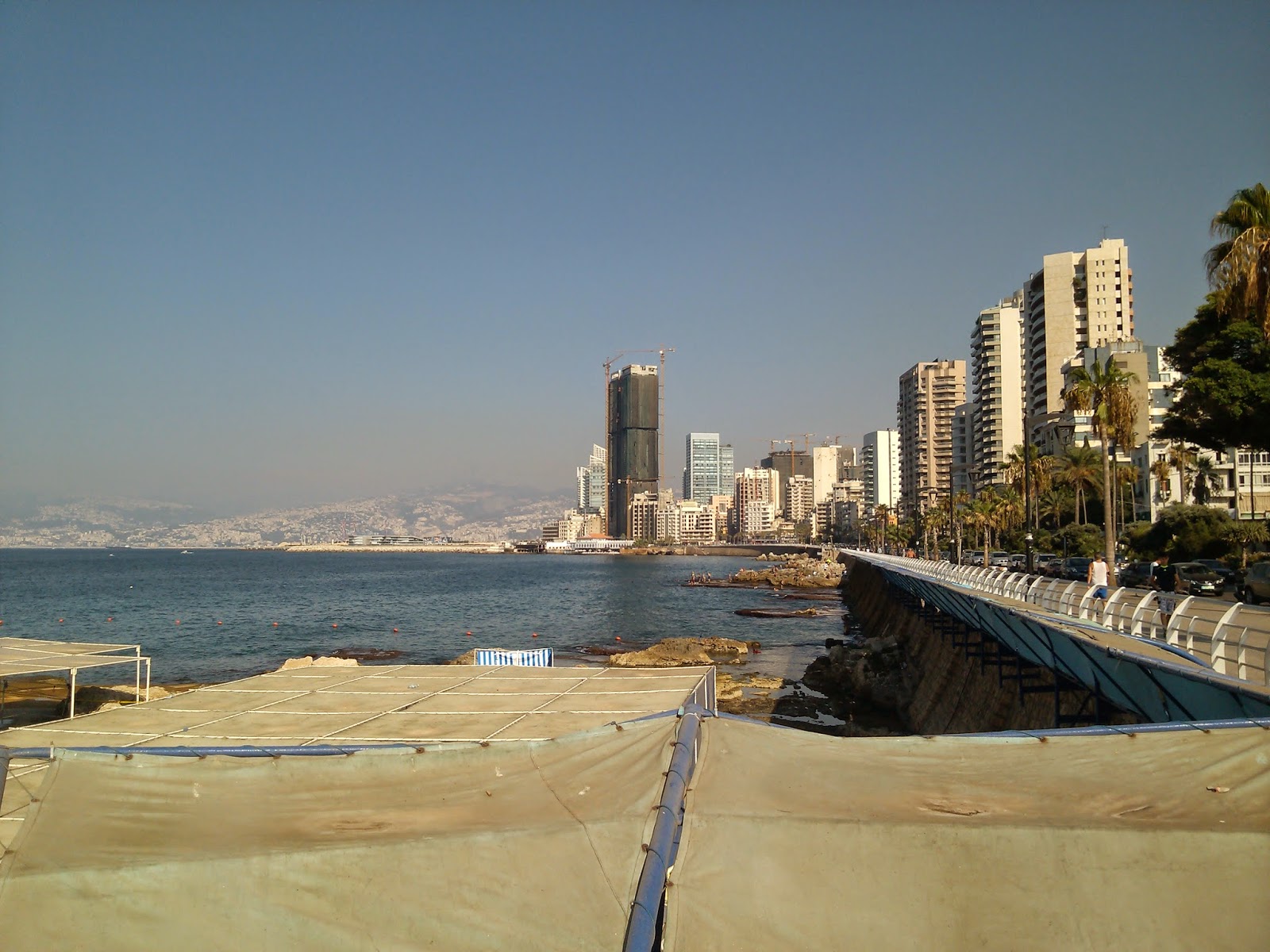 Ah, the Corniche.  It's a grand promenade along the north and northwestern shore of Beirut, between Saint George Bay and the coastal highway.  In another city, it would be a boardwalk, with commercial properties and the like, but aside from a few vendors selling fruit and corn on the cob and suchlike, there isn't much for sale here between the marinas every kilometer or two along the shore.  People walk, run, or ride bicycles along the wide pavement, which has more than enough room to not crowd anyone one, at least not when I was there.  There's a place renting bicycles and pedal-driven four-wheel carts about, hmm, two kilometers from the hotel, on the other side of the highway.  As usual, you take your life in your own hands crossing traffic, but that's really the only way to do it.  It isn't really a pedestrian's city. 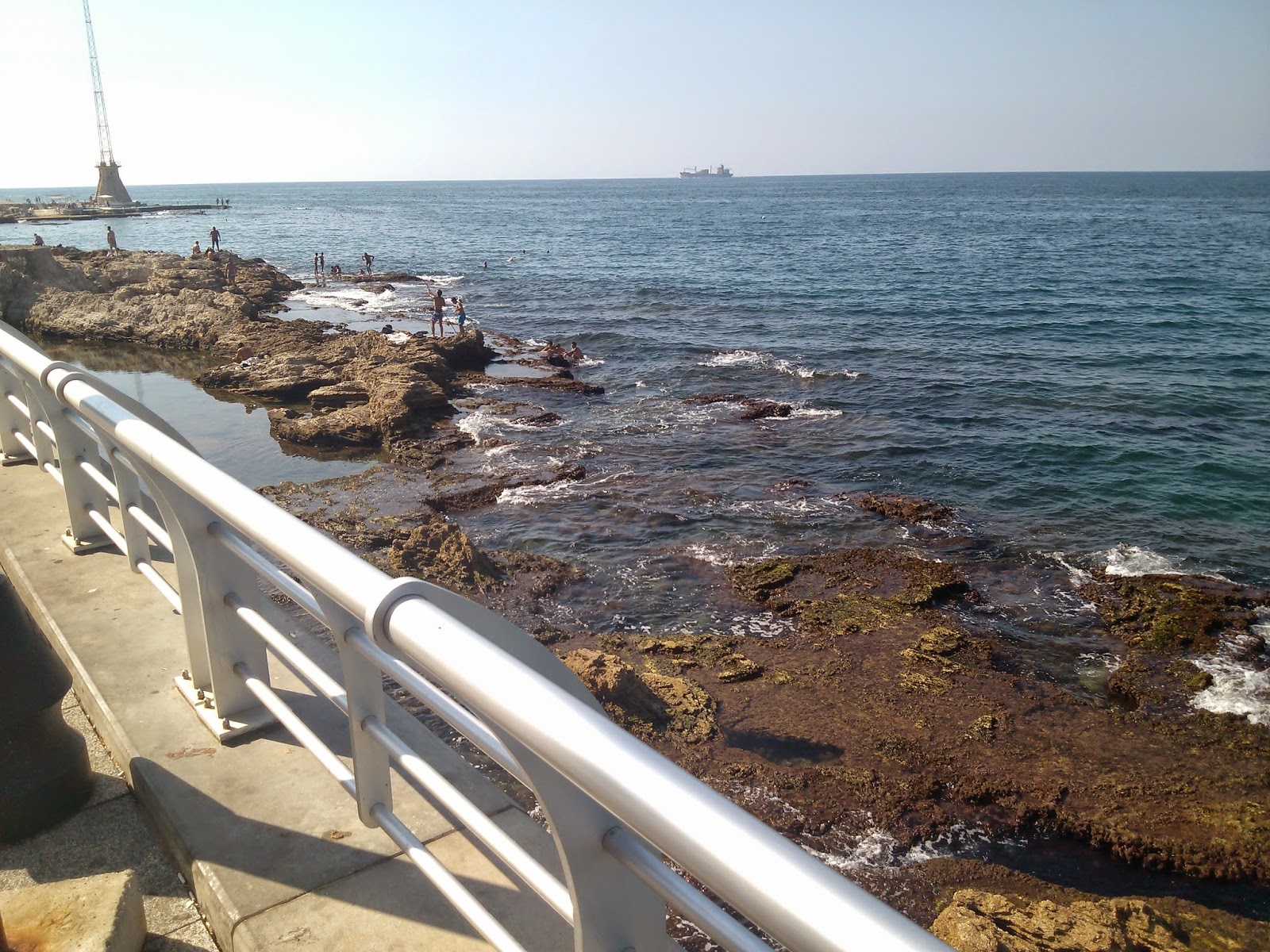 The bay along the Corniche is a major hang-out for the young men of the city.  They climb down to the rocks below, and go swimming in the waters of the bay.  There isn't any beach to speak of - and that's too mild a way of putting it - it seems to be just knobby brown rocks and ocean down there, of varying depths.  I saw at least one young man with scrapes all across his back from some sort of mishap, but the vast majority of them were just cheerfully splashing about without any concern for, oh, I don't know, being smashed against the rocks by the current or waves. 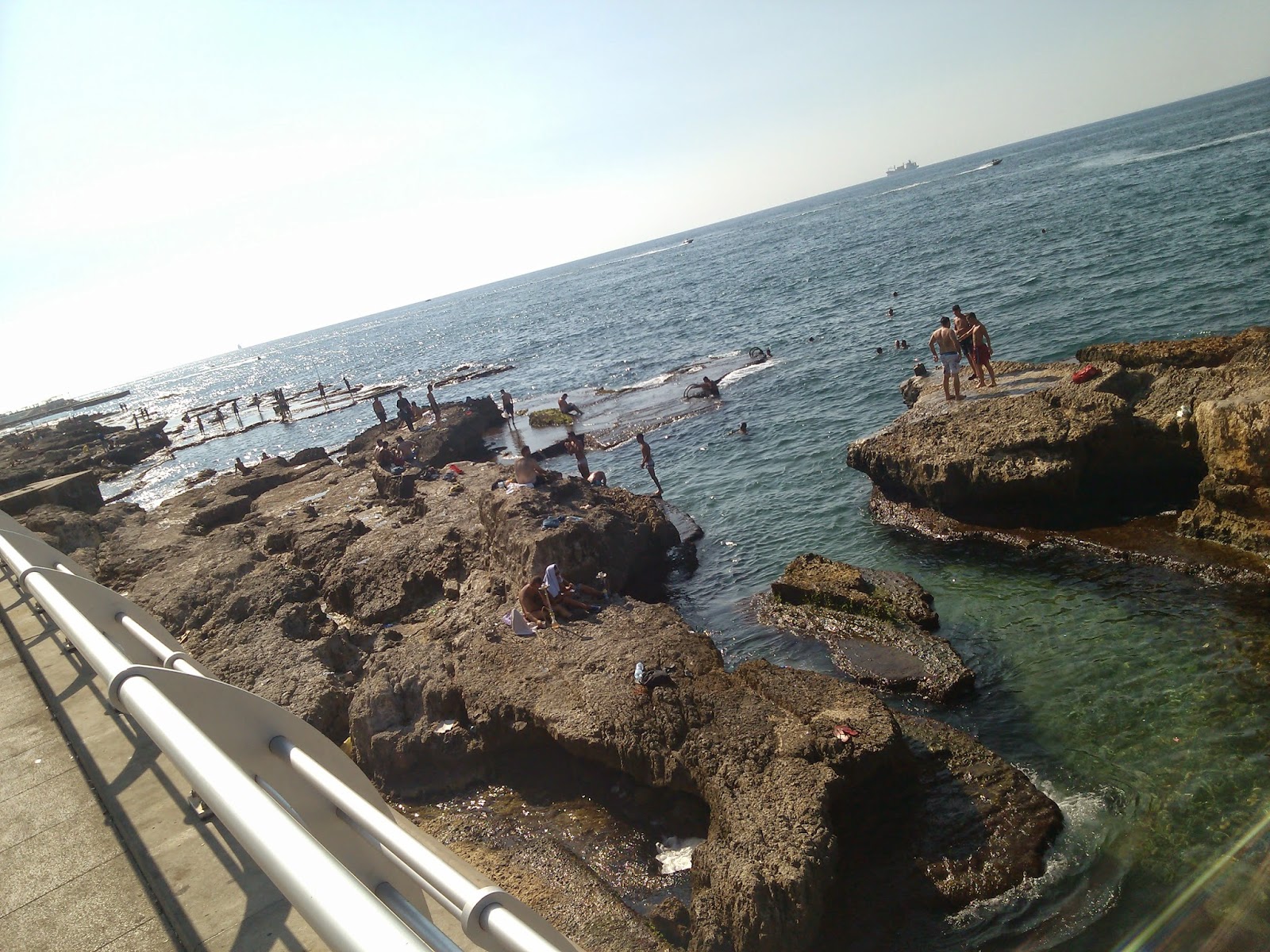 And it was mostly young men, with some older men thrown in, and some kids here and there.  There was one section with young women in those full-body Muslim swimming suits swimming in a section next to one of the marinas, but that was the exception to the general rule that this was a swimming park just soaked in testosterone.  Some places the swimmers had thrown climbing ropes over the side of the wall, and clambered down to the rocks, and some places there were steps down to the water - 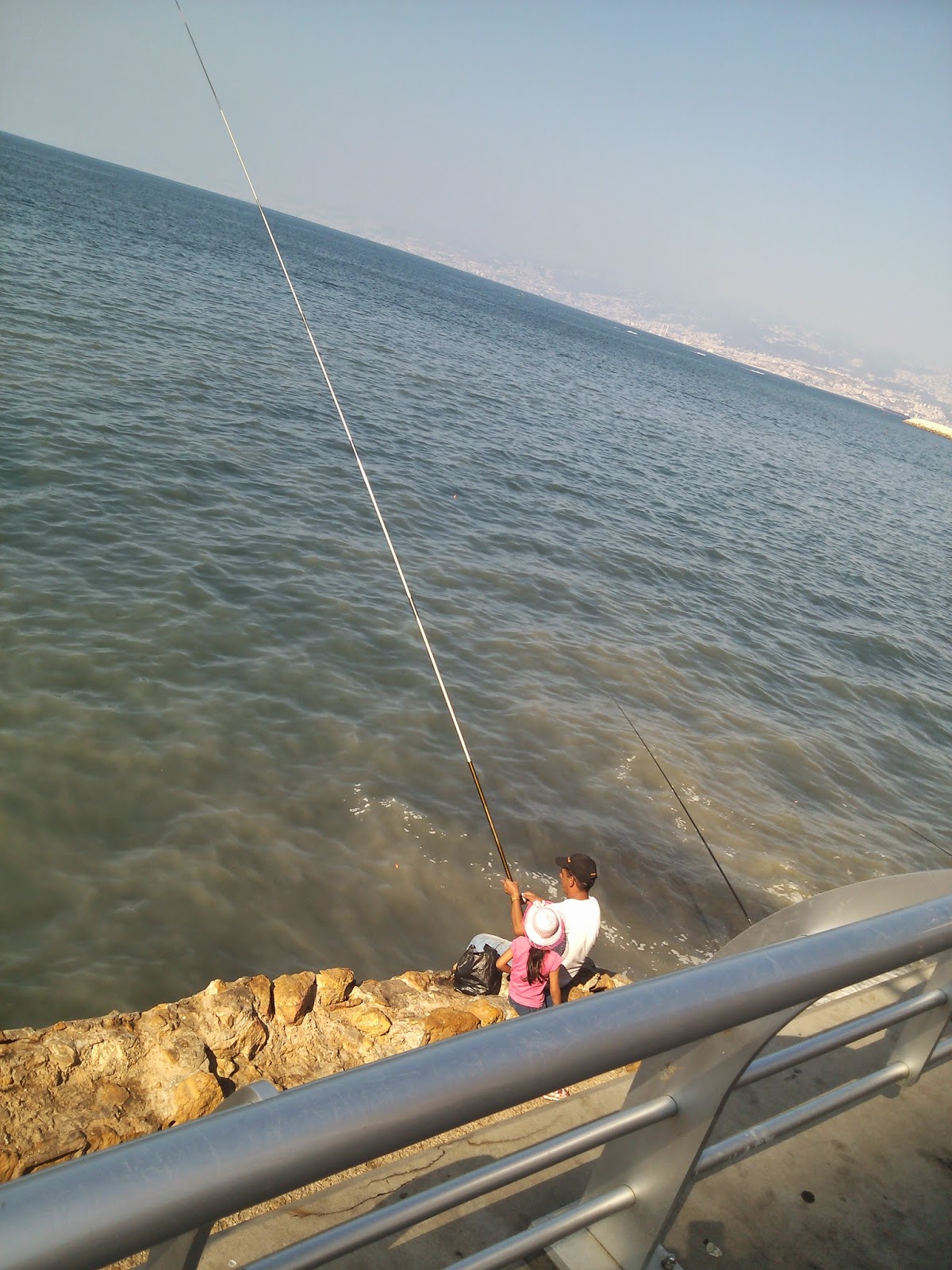 presumably for the fishermen with their preposterously long pike-length fishing poles.  I'm not sure what they were fishing for - it can't have been for the tiny little baitfish which was all I saw them hauling out of the water.  But in other places there were tall, vertical rings of iron sunk into the rocks, for swimmers to climb in and out of the water, and steps driven into the rocks, so someone had gone to some length to turn the rocky shore into a semblance of a park pool. 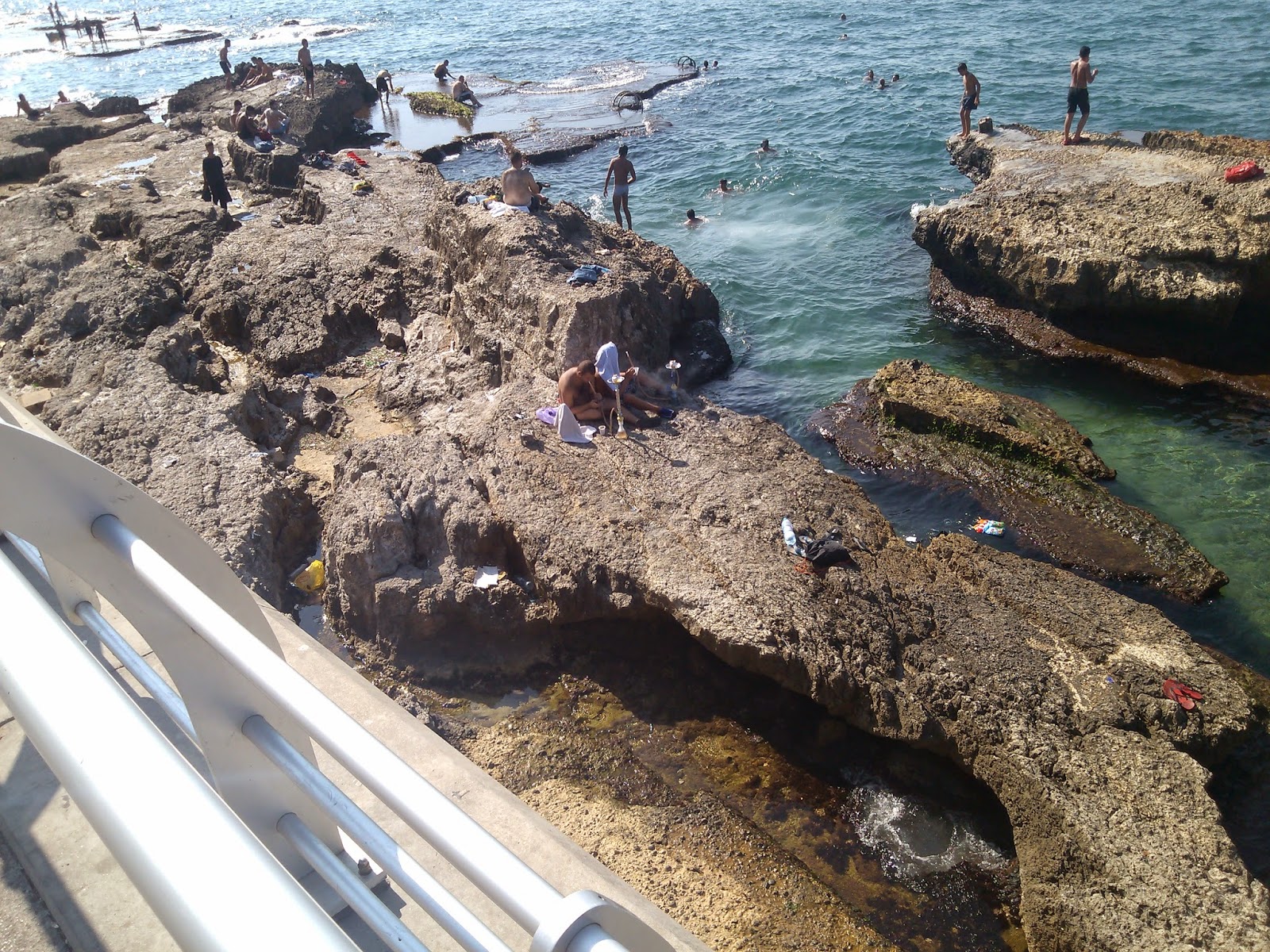 There also seemed to be a sort of tradition for the swimmers to haul portable water pipes down to the rocks for a pre-swim smoke before diving into the water.  Here's a fairly good shot of a smoker toking up in the sun.  (I have no reason to not think it's tobacco, pot-heads.  I'm pretty sure pot and hashish are illegal in Lebanon, and I have no reason to think that someone would violate the law in public in a city where the cops carry assault weapons in the streets.) 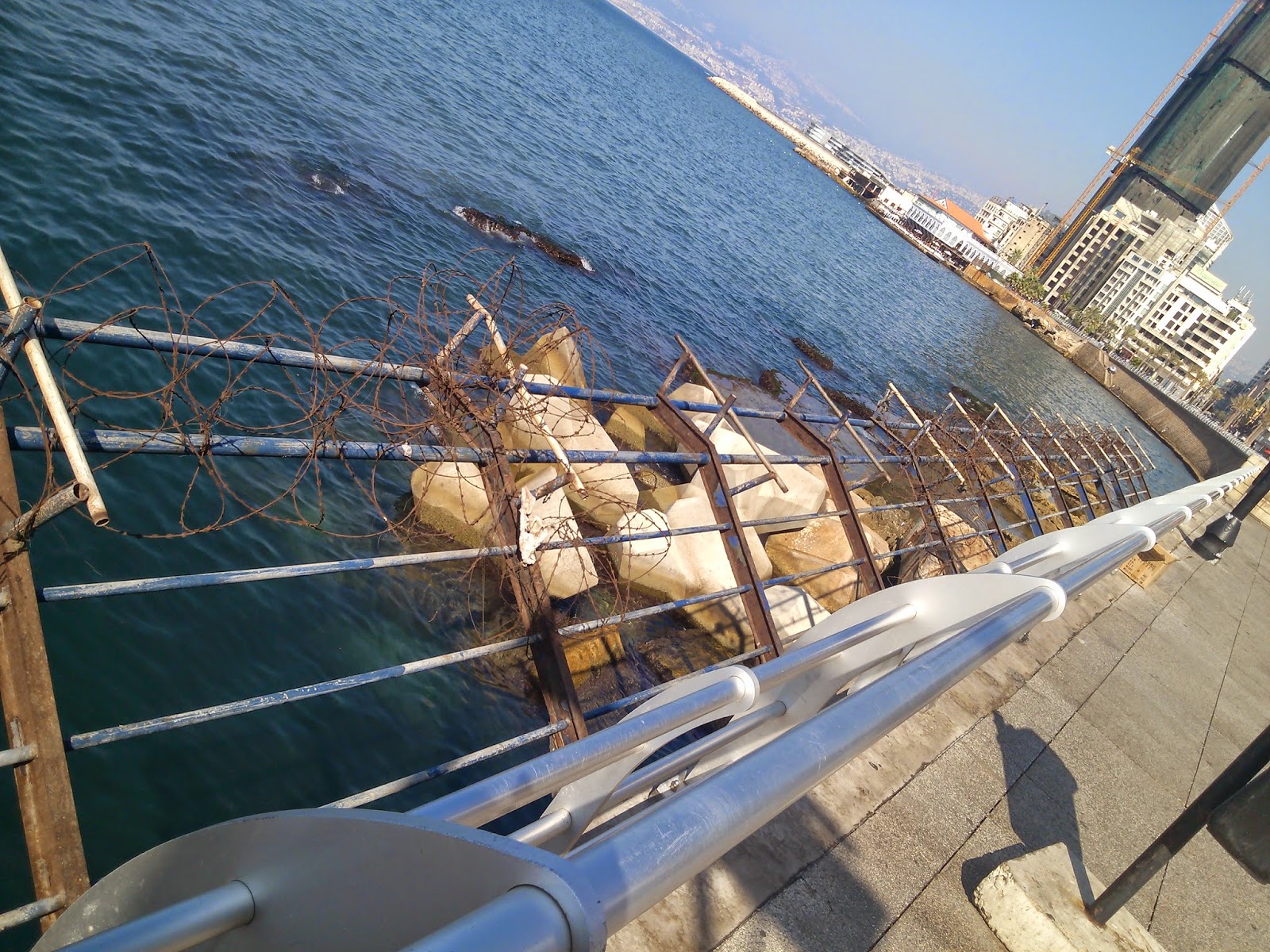 Lastly, there was the crazy kids diving off of this set of guards along the rail, into a deep water hole between the rocks below.  Someone had wrapped barbed wire around the whole set of rails to *keep* people from doing this, but someone else had cleared the wire away from about a five-six foot section of rail, and the first day I was there, I saw kids climb up, sway precariously as they gathered their courage, and plunged off the rails into the water thirty-thirty five feet below.  The ones I saw emerged from their feat unscathed, but dang...

There are plenty of people out just walking, as well.  There was a local TV film crew doing man-on-the-street interviews.  The reporter came up to me to ask me something or other, but I had to inform her that I spoke no Arabic.  I guess people weren't kidding when they said that I could pass as long as I didn't open my mouth!