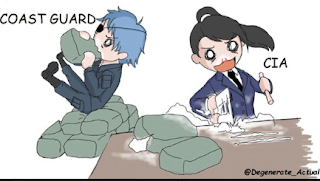 Sorry, needed a place to stash an image. 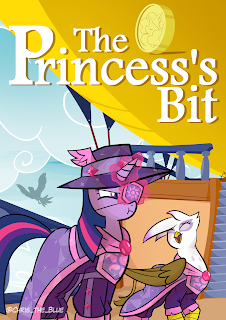 Having climbed high
and pausing on the rocks
At the breaking of the slope
I look down on my path.
This hill is high, and higher than some
But most? That would be a myopic sin
And my sight is still clear.

Hidden around the slope's sure shoulder
The main ridge looms behind my modest peak
Between is a concavity water-cut by ruin and wear
The great ancient mountain worn down like a tooth
The softer matter gone, leaving the hard fragile shards
To gum and cut in sharp old age.

The summit lurks somewhere above
A topographic crest, the highest point
The secret of engineers
Spreads open at my feet
Battles are fought at the breaking crest.
For every crag ever so harsh
Plateaus for a moment, a second, a breath
Before sharp drops
Mountains are high and summits higher
But more can be seen perched on edges.

The trail plunges steep
And I marvel at the depths
In such a small place
Paced from end to end not twenty yards
The clearing holds my world enfolded
The wide fields by roaring roads
The narrow cliffs in quiet woods
The wild slopes were so wide, and my path was so narrow.

Just as no life is lost in the living
And no cliff claimed in the climbing
I see the land as I lived it, and own not an inch of it
But what I carry right now.
There are many roads, and I have chosen mine
And I cannot see where it goes from here.
Soon for second winds and the peak, and mountain miles
But for now I gaze over the great valley floor
And think on where I've been. 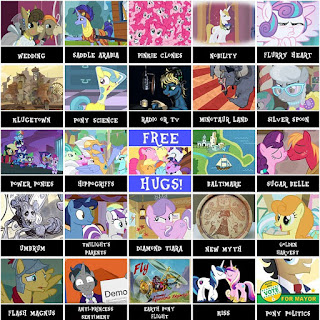 So, Oliver's put together a Season 9 Bingo card for the last season of My Little Pony: Friendship is Magic. This is my card for the season. Five hits in a row is a bingo, either seasonal or, for the difficult run, a single episode. Some of them are going to be basically impossible - good luck getting the current show-runners to mention Lauren Faust on screen!

Tile rules are listed in hover-overs on the application itself, and also in the game rules, just scroll down.
Posted by Mitch H. on 10/28/2018 No comments:

For those who don't follow Saturday Morning Breakfast Cereal, the artist got together with his much less crazed brother to start doing these civics-lecture comics.  They're kind of great.

So go check out the Weiner Brothers' Law and Sausages. You won't be disappointed.
Posted by Mitch H. on 10/16/2018 No comments: 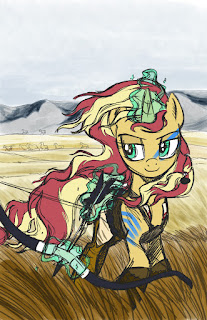 I've been using this art for one of my current stories, Those Who Ride.  It's a colored sketch from when the artist and I were going back and forth about the commission.  She delivered the final art today. Here it is: 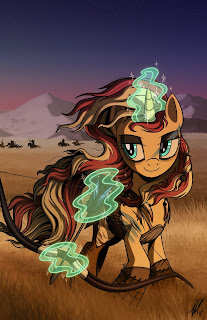 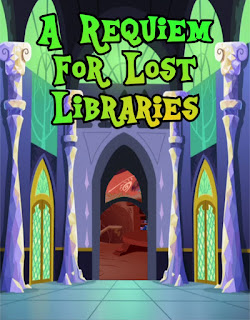 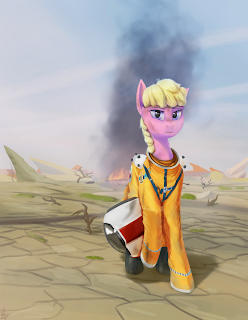